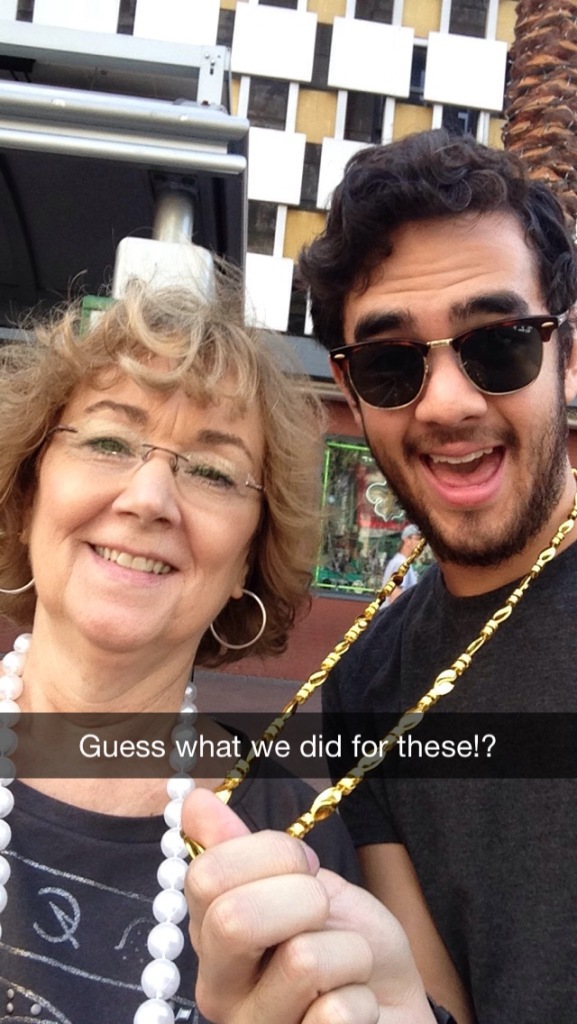 Mom and me at the Christmas Parade 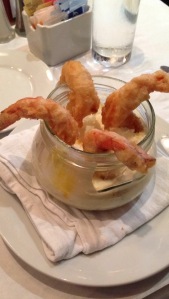 Egg in a Jar at Lüke

The next morning, mom and I hit up our final Besh restaurant, Lüke. I ordered the ultra-rich Egg in a Jar, which consisted of poached eggs, grits, fried shrimp and a cream sauce. Mom ordered Shrimp and Grits, which was relatively similar except non-fried shrimp and a tomato based sauce. The meal continued the trend of unbelievable food in New Orleans and me feeling sick to my stomach after eating past my limits (it’s hard to stop when it tastes so good!).

We had originally planned on going on a walking tour of the French Quarter until we learned about a Christmas parade going through town that we decided was worth seeing. We sat on the curb of Canal St. for hours watching floats and dancers pass by.

We took a long walk to get to the French Market, which had a large variety of knick-knacks, flea market goods and foods. I tried an alligator dog that was excellent. Our feet were pretty tired after the walk, so we left to go back to our hostel for another break before dinner.

Our final meal in New Orleans was at the famous Pascale’s Manale, which many people had said would be disappointing – it certainly wasn’t! Although the service was very slow (it was understaffed for sure), the Barbeque Shrimp was a messy delight – they gave us each a paper bib, which was truly necessary – and the Frutta Del Mare (seafood pasta) was filled to the brim with seafood. We left again unable to eat dessert.

Mom wanted to go to bed early that night, but I was keen on going out for a last time in New Orleans, so I went to the common outside area of the hostel and met a group of Irish guys traveling through the South together and a guy from Quebec who I would go out with. We started with a live charity concert at Freret Street PUBLIQ HOUSE, where the boyfriend of the lead singer proposed on stage (my response: “could anything more American happen than a public proposal in front of a bunch of strangers?” – Europe got me too sarcastic).

We left PUBLIQ and cabbed to Bourbon Street where we drank more and danced a bit. The boys and a female bartender legitimately forced me to take a shot out of bartender’s breasts, which served as my coming out moment: “No really, I don’t want to – I’m gay,” I said as she grabbed my head and pulled it towards her chest. They all laughed when I told her that was as close as I’d ever been (or wanted to be) to boobs. I’m sure I’m the first guy she’s ever had to force to take shots from her. At 2 a.m. I got a text from my mom asking if I was alive; I reassured her that I’d make it home safely. I got back at 4 and my mom asked me if this was what it was like when I traveled.

The St. Louis Cathedral next to Jackson Square

Mom and I left early the next morning after one of our best bonding experiences ever. I can forever say I successfully got my mom to take a shot of Fireball AND that she knows all the steps to the “Cupid Shuffle.”

It’s a day late, but yesterday was my parents’ 30th anniversary!

They ate at my favorite restaurant (and old workplace), Oceans, back home in Little Rock.

I want to take this time to thank you for putting up with me for so many years and supporting me with whatever I do, whether it was those five years I wanted to be an actor or the other five careers I’ve thought about in the last two. You are the reasons I am able to attend a great school like Northwestern, the reason I was able to traipse around London and Europe for three months, and even the reason I have boxes of Girl Scout cookies and Jiffy cornbread mix in my house.

I know I don’t take the time to thank you enough, and sometimes I forget to text back or call about my insurance or other things you ask of me, but I appreciate every opportunity you have opened for me.

Happy anniversary. I love you both so much.

My mom just left yesterday from a four-day visit, allowing me to get to do a lot of the things I normally wouldn’t, like eating at Friends Sushi and seeing Book of Mormon! And, of course, I got to spend time with my mom and pretend like I didn’t have a ton of work to get done… Work that I should be doing right now…

Anyways here’s a rundown of some of the stuff we did:

Pretty much the second mom got here, we headed downtown to eat at our all-time favorite restaurant, Friends Sushi. If you haven’t been there before, you haven’t been living. Their fusion sushi rolls are extremely creative and flavorful. The first time I had their Friends Maki, I tasted a familiar yet mysterious tartness only to realize that there was thinly sliced green apple in it. Hopefully that gives you an idea of the kind of sushi you can expect to enjoy here. 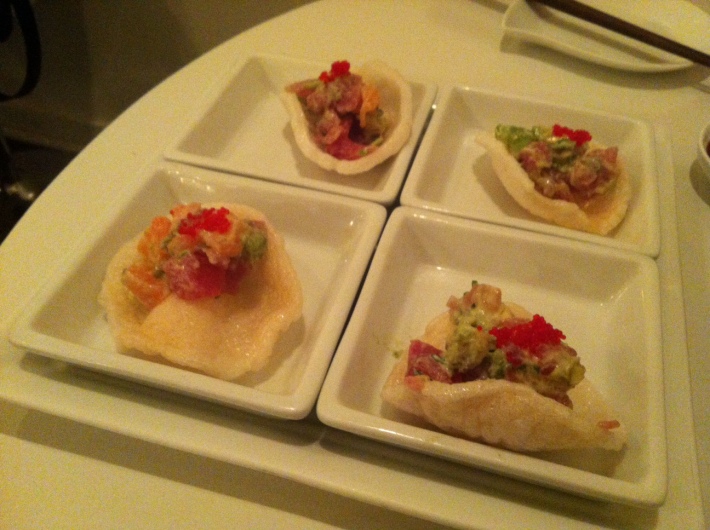 We made our way to go shopping, because what else is there to do downtown when it’s freezing? Oh yeah – I forgot to mention that after a nice, 50° Monday, it decided to drop to 15° when mom came. So of course she vowed never to come back in February. It’s definitely the month in Chicago to skip if there is one. The stores had some good sales, but it didn’t take a lot of un-layering and relayering and carrying huge coats around before we were ready to head back to Evanston.

We grabbed a quick bite to eat and then went to see Argo, which was as good as I expected it to be. Ben Affleck was snubbed from the Oscar nom AND WE ALL KNOW IT!

I had class all day on Wednesday, so we were only able to grab breakfast at Le Peep during the day. After class ended, mom and I headed downtown again to see Book of Mormon. I made my mom take the el there and back so she would see how we cheap college students do it (and save like $100).

Book of Mormon was the best musical I have ever seen (well maybe tied with Avenue Q). I was thrashing with laughter the entire time. It was so funny that halfway through the first act, I stopped laughing because literally everything was funny. I’d actually become habituated to the humor – and then it got funnier. Performances, script, and production were all top notch. Definitely go see it. It’s a blast.

Mom and I had lunch at Bat 17 before I went off to class until 5. We had dinner at Bravo and then went to see Jonny’s show, The Pajama Game. I’m always so impressed with how talented the students at our school are!

Friday was short and sweet. We had lunch at Chipotle and then said our goodbyes. I’m hopefully going home in April to visit again and see everyone, because I probably won’t get to go home this summer. It’s always nice to see my mom, but it was time for me to get back to work – homework and more internship applications are on the horizon!