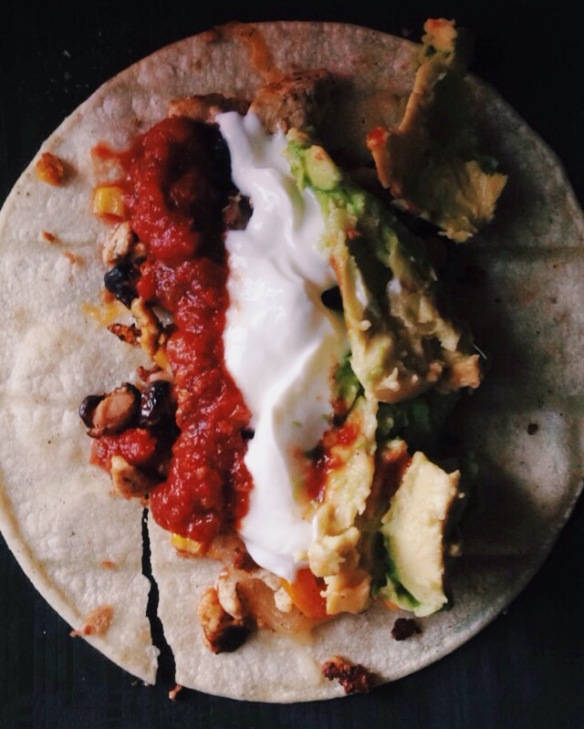 Since I moved back to DC, I’ve started eating vegetarian again (with fish and seafood on occasion) and taking a more comprehensive approach to being healthy by working out and cooking the majority of my meals. This Tofu Taco recipe is one of my favorites and tastes better than any beef or chicken tacos I’ve ever had, although I can’t compare it to my favorite dish in the world, fish tacos. This is an extremely easy recipe and makes enough to feed 4-6 people (or yourself for days) and can easily be adjusted to fit vegan diets.

An aside, most vegetarians and others seem to have strong opinions on tofu and soy and its health benefits/environmental impact. I enjoy soy as a nice protein boost and meat substitute, but I suggest only buying organic because non-organic soy has been processed with a controversial solvent called hexane.

Cooking Time: 45 minutes to press the tofu, 15 to cook

1 package Organic Extra Firm Tofu
1 can corn
1 can black beans
1/2 onion, diced
1 bell pepper, sliced (I use one half orange and one half red)
1/2 bag spinach (or more depending on preference)
Cumin to taste
Cayenne pepper to taste
Chili powder to taste
Salt and pepper to taste
Corn tortillas

If you’ve never made tofu at home, the first thing you need to know how to do is press and dry the tofu. You can do this for 30-45 minutes before cooking, but sometimes I will leave it out for an hour or so if I have the time. 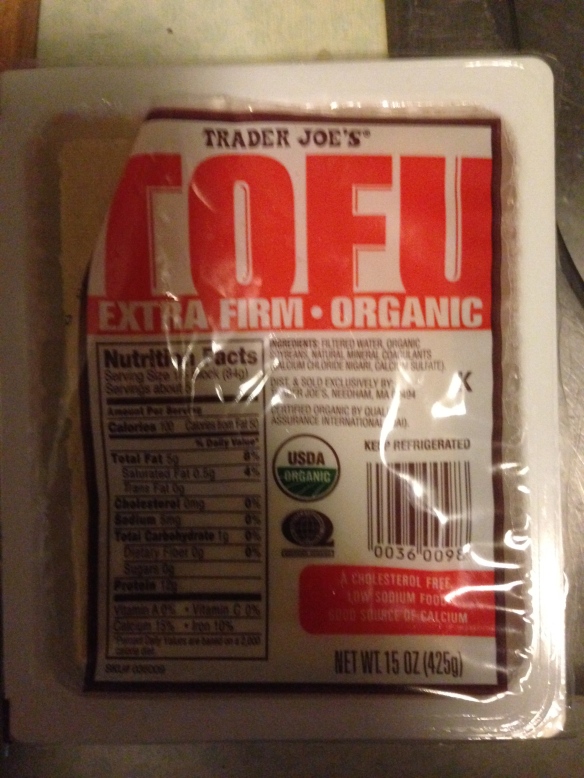 I use Trader Joe’s Extra Firm Organic Tofu. Slit open the sides and drain the water out. 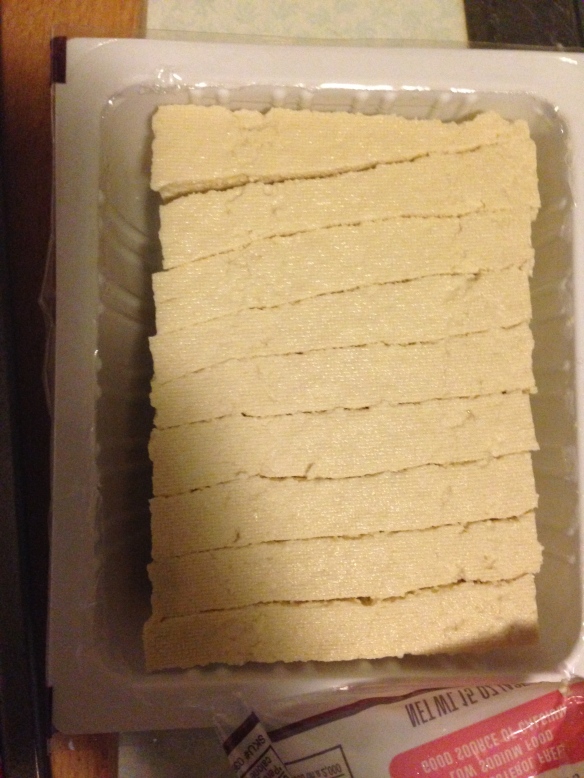 Slice the tofu into 1/2″ slices in the container. 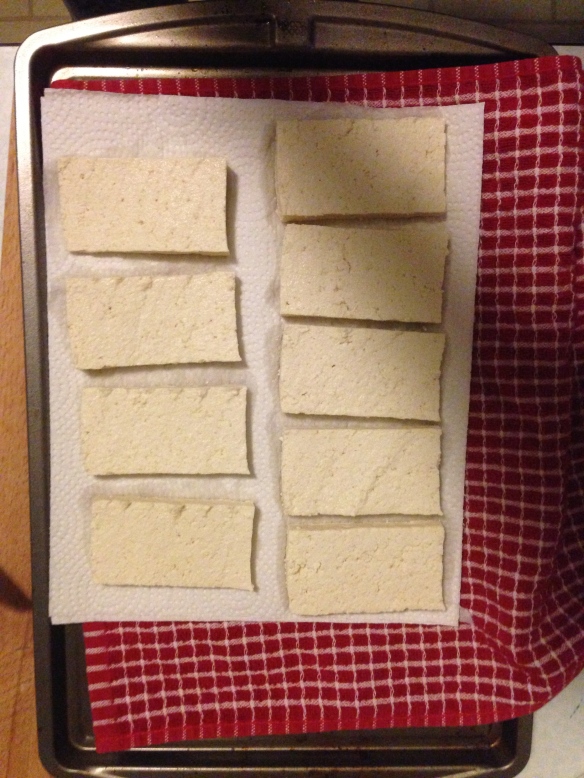 Put down a cloth towel on a hard surface (I use a baking sheet) and lay paper towels three thick on top. Place the tofu slices on top of the paper towels. 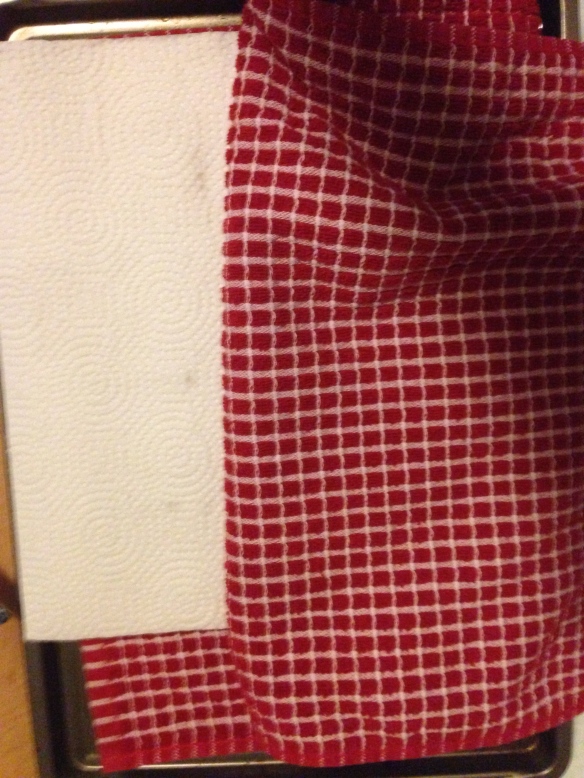 Place three more paper towels on top of the tofu slices and cover with the other half of the cloth towel. 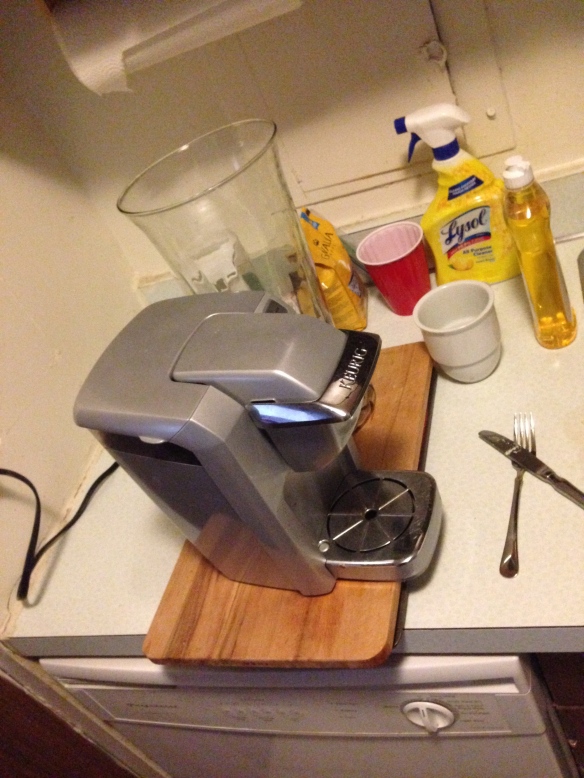 Put a hard, flat surface on top of the towels (I used a wooden cutting board) and place heavy objects on top to press the tofu. This will help the towels soak up the water. 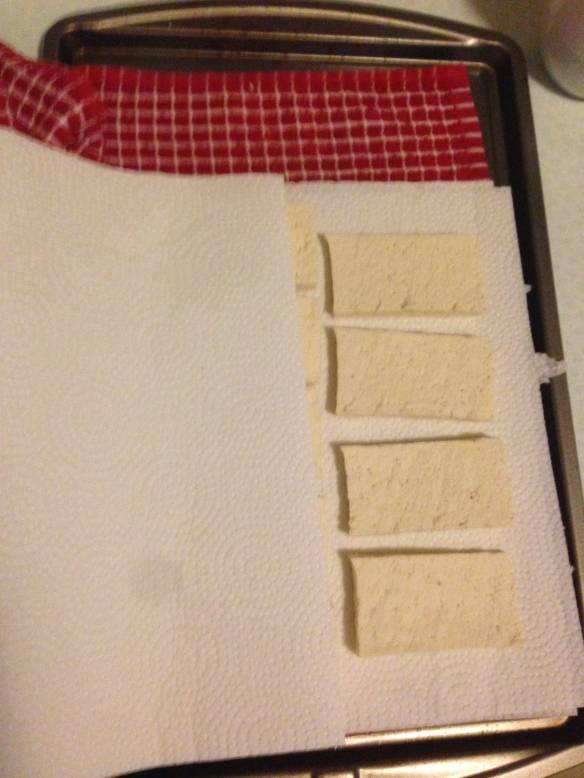 Replace the paper towels after about 20 minutes. I may do this twice if I am frying the tofu, but it isn’t completely necessary with this recipe.

After about 30-45 minutes, the tofu should have lost a lot of its moisture and is ready for the recipe. 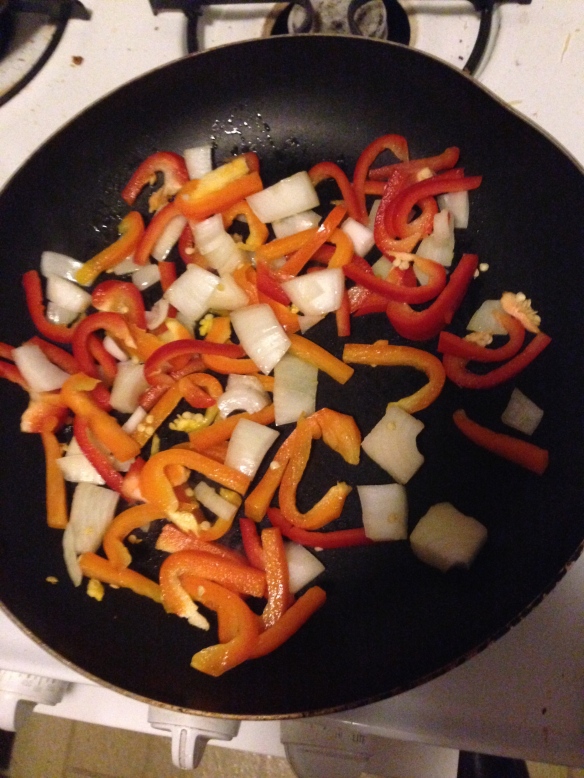 Grill the veggies in oil until lightly browned. 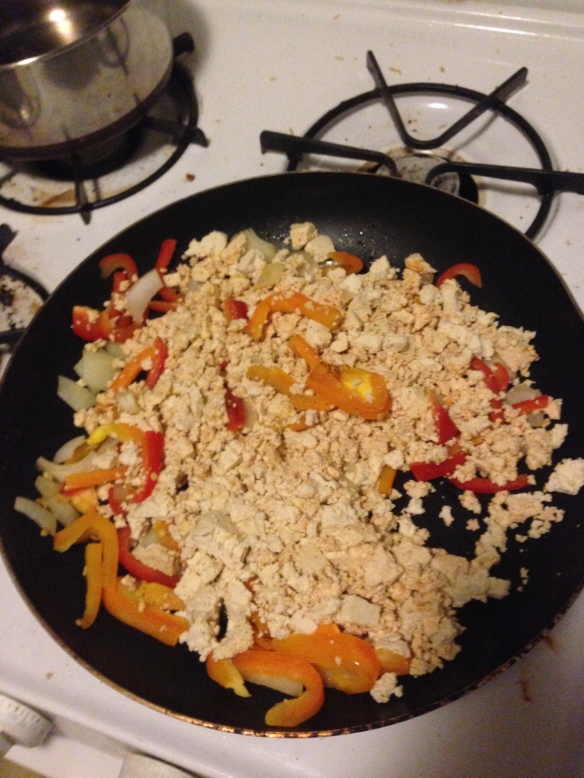 Ground up the tofu and mix in with the grilled veggies. 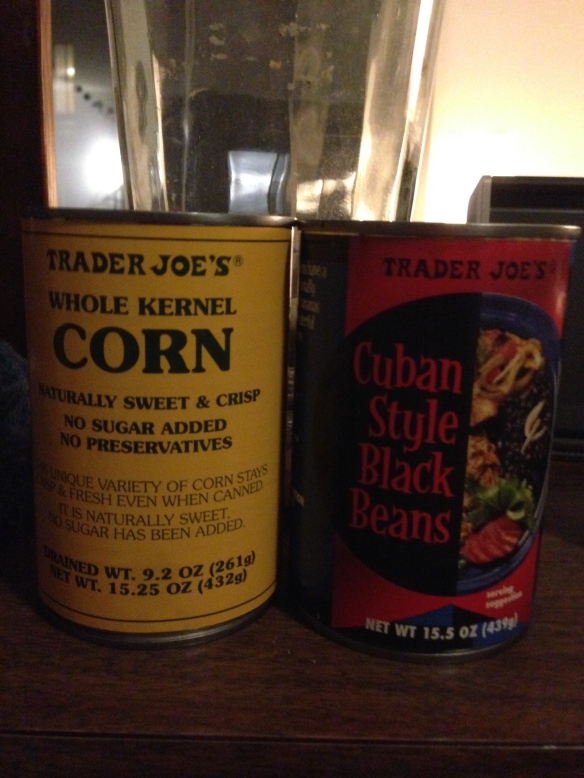 Open and drain your beans and corn. I use Trader Joe’s Whole Kernel Corn and Cuban Style Black Beans. 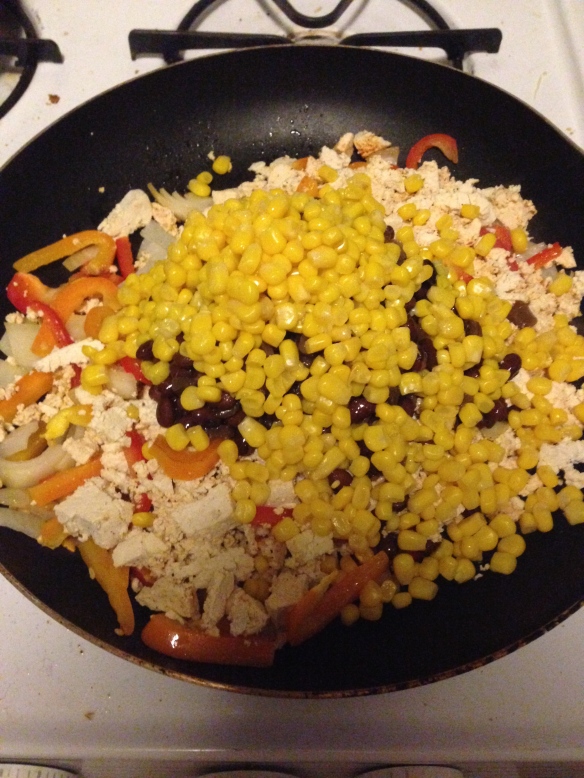 Add the beans and corn. 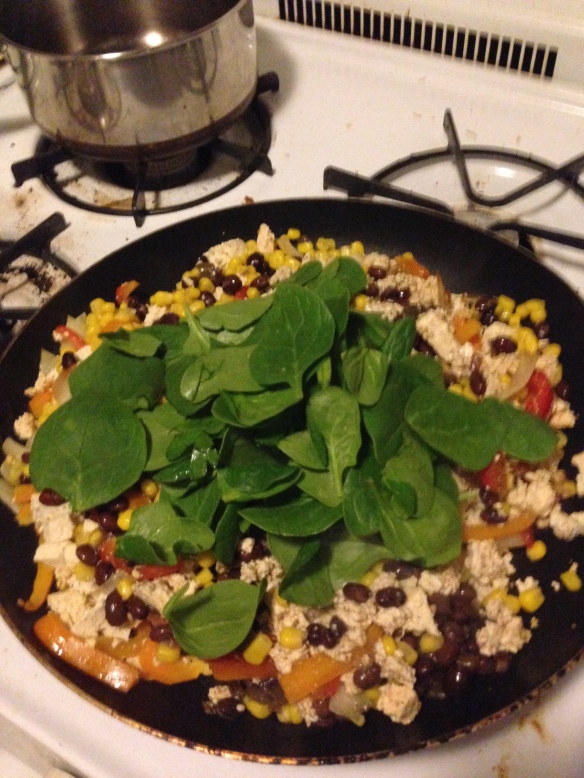 Add in a handful or two of spinach. You can really go crazy with it because it cooks down so much. 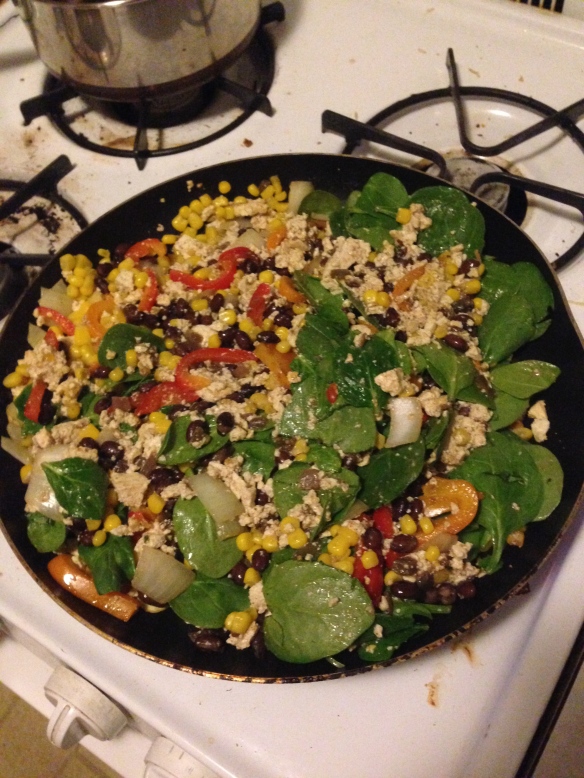 Continue mixing the ingredients together. 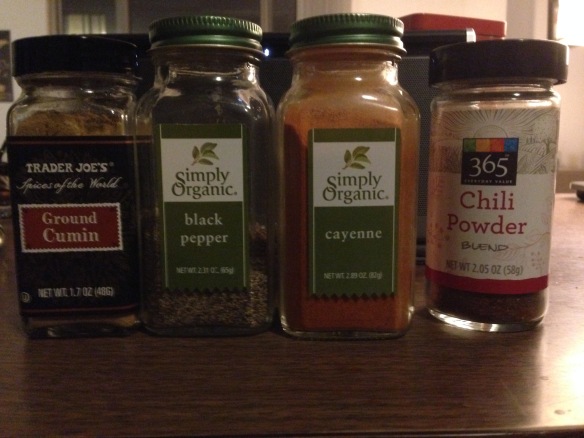 Add seasoning to taste. You will probably use more than you think you do so don’t be shy, especially with the cumin and chili powder. This really gives it that tex-mex taste. You can also use a package of pre-made taco seasoning, but I like knowing exactly what ingredients I am using and premade seasoning may contain additives, etc. 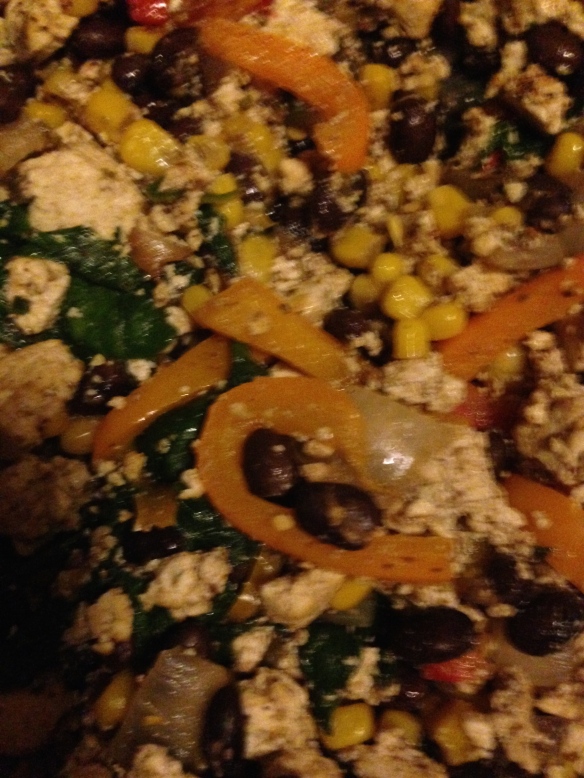 A blurry, up-close photo of what your taco filling should look like when done.

So far, the recipe is totally vegan. You can leave out the Greek yogurt and cheese if you want to keep the recipe free of animal products. 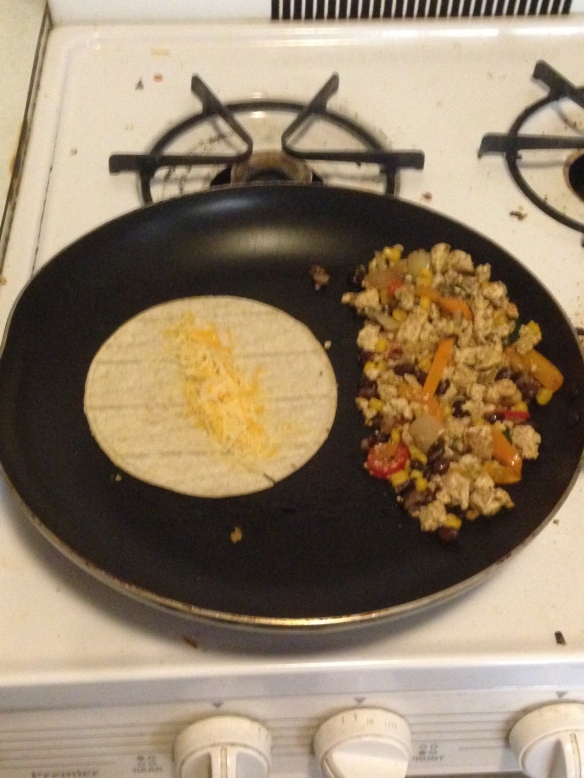 Clear the pan (or use a new one). Take a corn tortilla and cook it on one side for a minute or so before flipping. Add cheese and cook until the other side starts to brown and the cheese begins to melt. 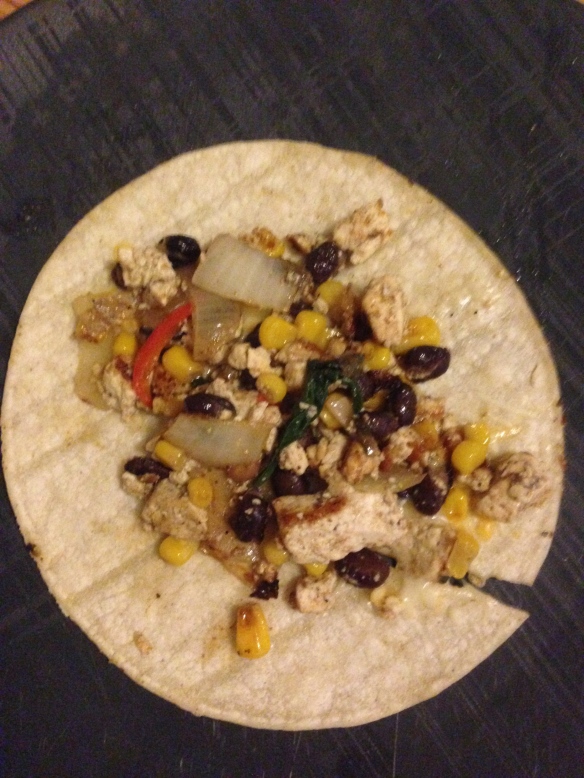 Add the taco filling on top of the cheese. 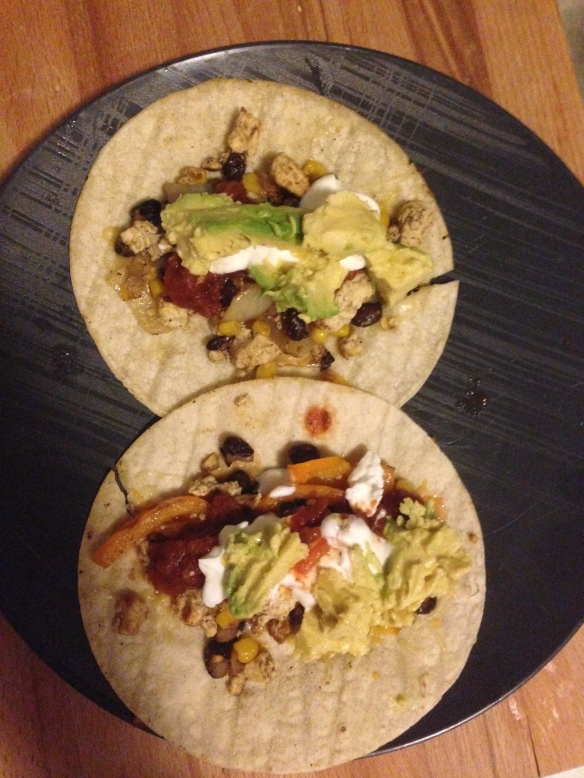 Add a dollop of salsa and Greek yogurt and a couple of slices of avocado. I also use hot sauce.

Final product! You can make the toppings look like the Hungarian or Bulgarian flag if you wish (this one is Hungary)!

You can also use the filling on nachos or add it to mac and cheese or any other dish you like. Hope you enjoy these tacos as much as I do!

I had two midterms yesterday, so the entire last five days have actually consisted of nothing but me studying. I’ve never studied so much in my life, but it was definitely worth it. Gotta keep up that GPA if I wanna go to grad school!

Aside from studying, well, I haven’t done really anything outside of my normal routine. So I’m gonna talk about part of that!

I make at least one smoothie every day because 1. they’re delicious and 2. they’re cheap and 3. they make me feel healthy. So here are some pictures of one of them. This one has frozen mango, frozen berry blend, a banana, and yogurt. I also really like one with OJ, banana, and frozen mango in it. You don’t ever have to add ice, just buy frozen fruit (or freeze your own). I use a hand blender because it’s easy to clean and really quick.

Experimenting with new flavors is always fun too. Woo! 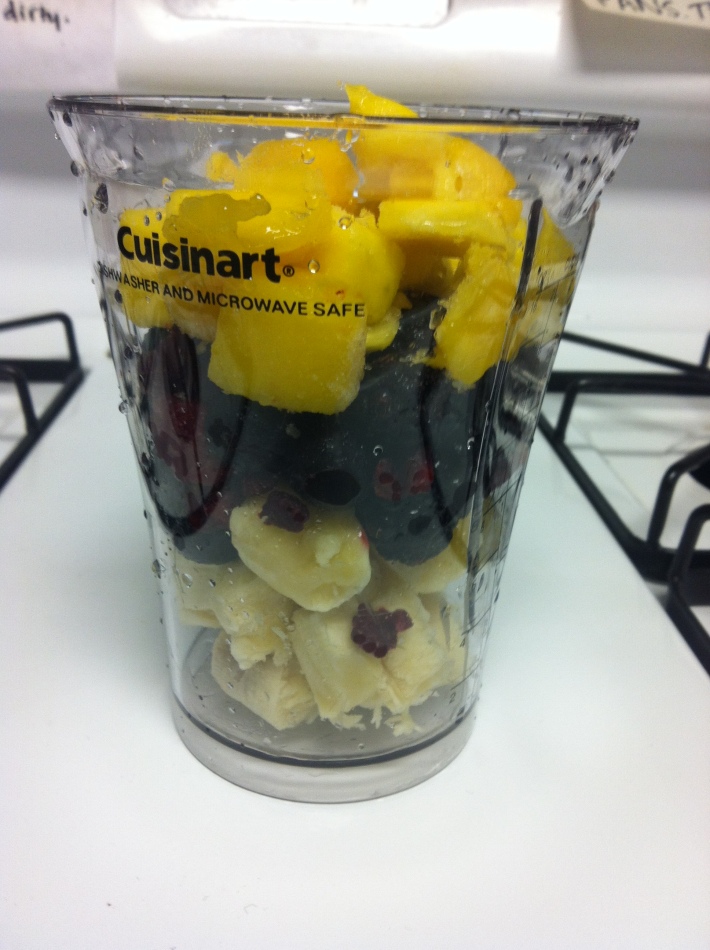 Putting in the fruit. 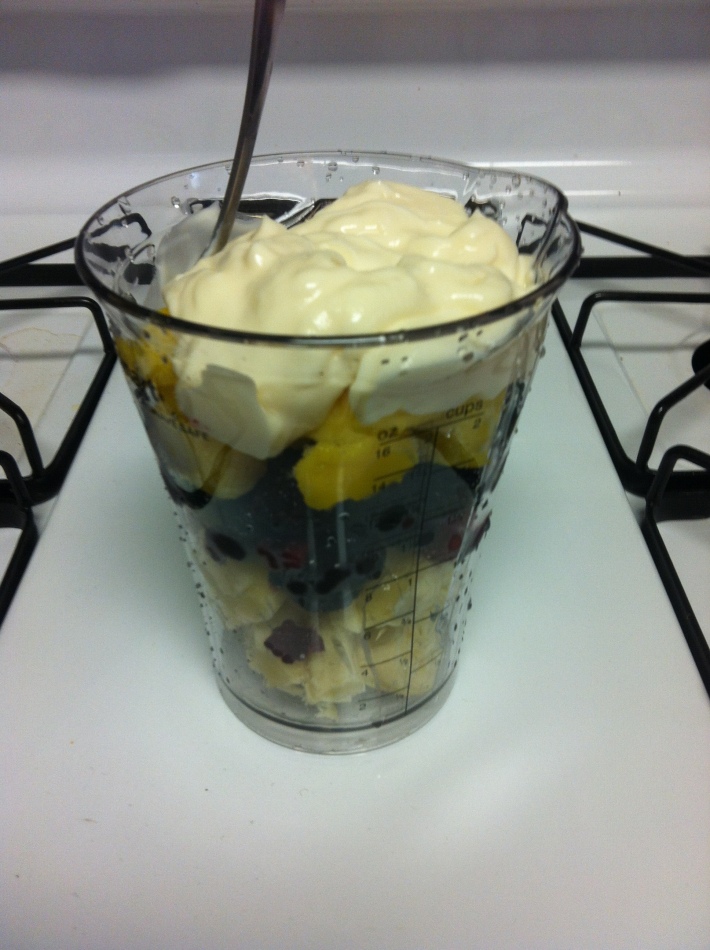 Adding in some yogurt. 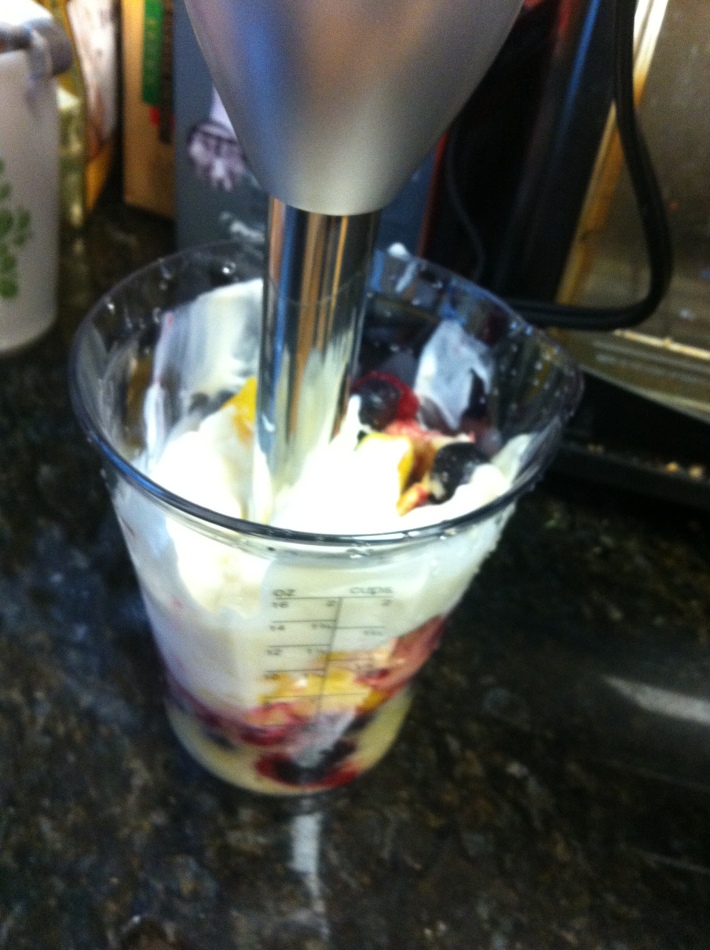 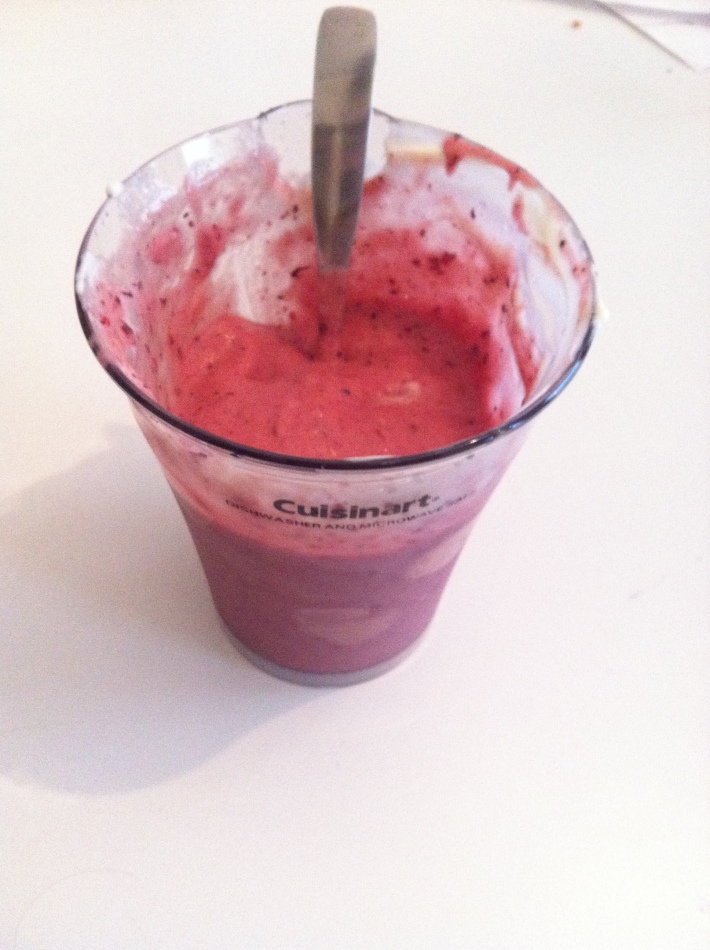 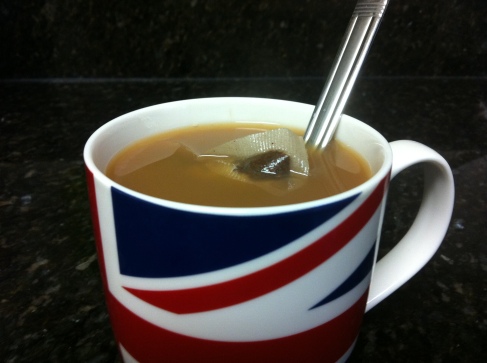 I’ve enjoyed three cups of tea (in my Union Jack mug!) in the last few hours while working on my Micro problem set.

I’ll go ahead and be annoying and mention that I developed a real love for tea over in England, where they really do drink tea all the time. There’s a stereotype for a reason, chaps! Anyways, I’ve realized that aside from its deliciousness, the warm-me-up-from-the-inside feeling I get in my freezing cold house, and its apparent health benefits (see this for more info), drinking tea also regulates and encourages my study schedule!

I fix myself a nice mug before starting my work. It’s a good transitional phase from whatever I was doing (in today’s case, laying in bed for hours) to hard workin’. Now that I’ve got a warm, comforting cup of my favorite drink, I’m zen and ready to get to work.

As I carry on with my work, I sip slowly and diligently, enjoying my work more and more with each delicious mouthful, and then OH MY GOD THE TEA IS GONE WHAT DO I DO?

At this point, I’ve probably been working about 30-40 minutes; it’s a great natural time for a break. I leisurely fix my next cup for 10 minutes and then get back to work. It’s like the perfect study-to-break ratio, and at the end of the break, my mind is rested — and I’ve got another cup of tea to get me through the next work session!

So if it’s not for the taste, or to curb your appetite, or for the antioxidants, drink tea for your mind. I assure you – homework is much more enjoyable and finishes much more quickly when you’re sipping on tea.

My house is 1.3 miles from the nearest grocery store.

For the first week and a half back here, I couldn’t get myself to take the trek and not even be able to carry that many things back with me. Luckily, Jonny let me borrow his car on Friday, and I was able to make my biggest independent grocery run ever.

Anyways, I’ve realized that I don’t quite have the time (or ingredients) to make that Lobster Corn Chowder I’ve always wanted my mom to make or even the Parmesan Chicken and Red Wine Alfredo I made my grandmother once. And because of this lack of time (or really lack of wanting to make all that effort and then clean all of it up), I’ve been learning some quick and yummy and healthy recipes. And in that vein, I’m going to pretend like I’m cool enough to have a food blog and post some of the delicious stuff I’ve made! 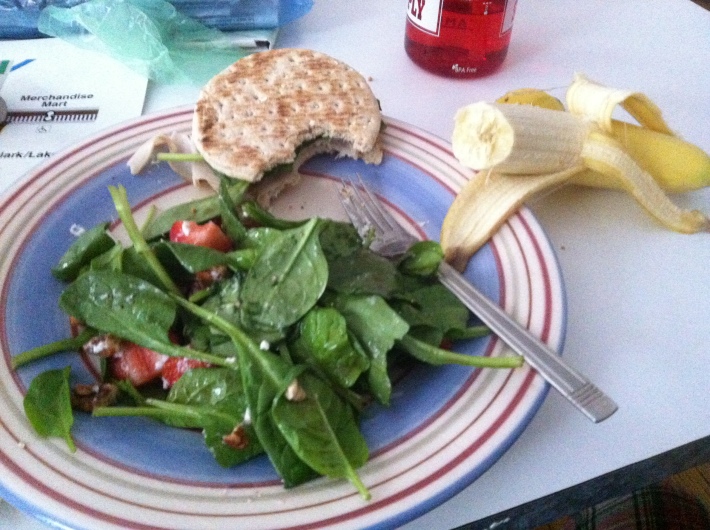 Ingredients:
A handful of spinach leaves
A handful of sliced strawberries
A smaller handful of candied pecans
Some crumbled goat cheese
Vinaigrette
Turkey (for the sandwich)
Sandwich rounds

Mix everything up salad style, except leave out the turkey and bread (obviously, you idiot). Then spread some goat cheese on a sandwich round and throw some turkey, spinach, and vinaigrette on it and you’ve got a delicious sandwich. You can even make it into a tasty melt. 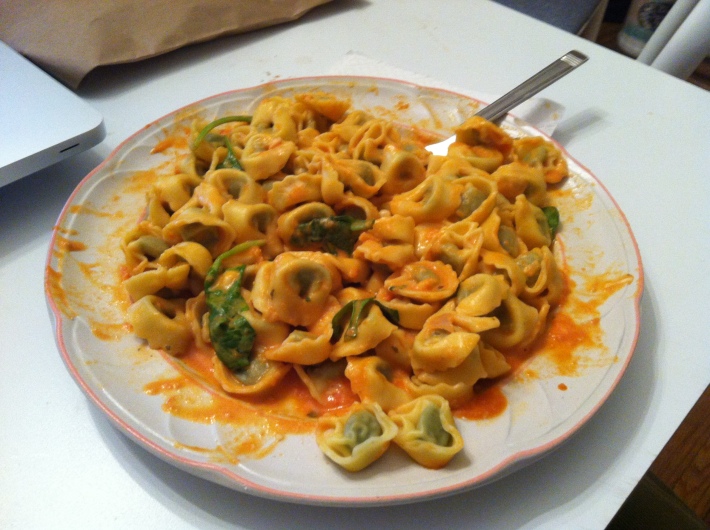 Ingredients:
Spinach Tortellini
Spinach
Goat Cheese
Bottled Vodka Sauce (it’s so much easier than trying to actually make your own…)

Hopefully I don’t have to explain to you how to make this one. Just put it all together (after cooking the noodles, again, obviously). To make it easier on yourself, just spoon out some sauce and put it in the microwave instead of making it on the stove. Who needs to have their pasta “tossed in the sauce” outside of a restaurant anyways!?

… and the best for last! 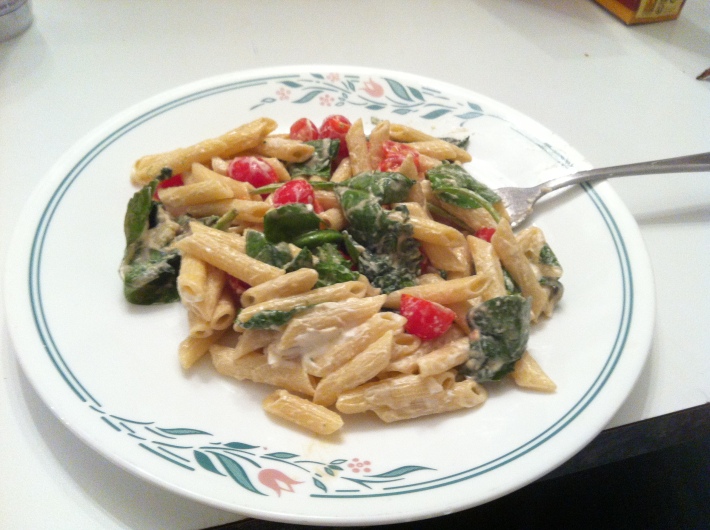 Okay so there’s totally a pattern with goat cheese and spinach, but both are pretty yummy and versatile (and I had to use them before they went bad!) To make this one, put the cherry tomatoes and spinach in a bowl, sprinkle some salt on them, and then put the olive oil and vinegar on top. Mix it all up and let it sit and get all juicy.

Then make the penne and just stir in a ton of goat cheese. You can add some milk if you want, but goat cheese is a gift from the heavens and secretly melts into a perfect sauce without you having to do anything but stir. Throw all your other stuff into the pot and excite your tummy tums.

Again, mom, I’m an adult now. And I’m sorry I ever let you make something on the stove instead of the microwave, asked you to put meat in everything I ate, or made you take me to Zaza all the time when I could have made the salad myself. Thank you for making me lots of delicious meals —

and I miss your lasagne.