Last Wednesday, myself and 24 other HRC interns attended Generation Progress’s Make Progress National Summit 2013 at the JW Marriott Hotel in Washington, D.C. It was an exciting day filled with influential speakers and nearly 1,000 young people from across the nation.

The day started off with an empowering speech from Massachusetts Sen. Elizabeth Warren on the current student debt crisis.

Student interest rates recently doubled to 6.8% due to inaction from Congress, while the government lends to major banks at less than 1%. In addition, the government will make a $51 billion profit from students this year. This has caused many students to live with their parents after graduation when they could be buying real estate and take jobs unrelated to their studies to begin paying off loans immediately.

Warren called for a major decrease in the interest rates as an investment in students, who can in turn use their education to benefit society and stimulate our economy.

“The government should not be making profit on the backs of our students,” said Warren.

Additional speakers included Neera Tanden, president of the Center for American Progress, Chris Hughes, co-founder of Facebook and young CEO of The New Republic and Minnesota Representative Keith Ellison, who gave the HRC a special shout-out for co-sponsoring the event.

David Simas talks about the importance of the Affordable Care Act.

David Simas, a senior advisor to President Obama, spoke about the Affordable Care Act and its implications for those who cannot afford healthcare, those who max out their healthcare plans, those with preexisting conditions and young people.

Later, a panel featuring Hawaii Representative Tulsi Gabbard, MSNBC’s Alex Wagner and Emily’s List Executive Director of Amy Dacey addressed what it takes to be a woman in politics or the political spotlight and the importance of female representation in politics.

The summit also included breakout policy sessions in gun control, immigration, the court system, student debt and voting rights led by experts in each field from various organizations.  HRC Chief Foundation Officer Jeff Krehely also joined a panel on the judicial system. He discussed the implications of the recent repeal of DOMA and Prop 8 as well as the future of the battle for LGBT equality, including high rates of homeless LGBT youth and workplace discrimination. Additional panelists addressed the importance of appointing fair-minded, diverse judges in a court system that has a desperate shortage of them.

The media and messaging workshop taught shared values between progressives and conservatives as a conversation tool.

HRC interns also attended training sessions on media and messaging, leadership and teamwork, policy creation, making “asks” in grassroots organizing and lobbying. The day ended on a high note with a speech by openly gay Senator Tammy Baldwin from Wisconsin, who gave an inspiring talk on creating change, electing the right officials and empowering youth.

HRC interns left feeling impassioned and excited about our country’s future while also motivated to put in the hard work it will take to turn these ideas into reality.

Although living in a hoarder house was one of the more memorable and unique parts of my recent trip to NYC, there were many more adventures had. 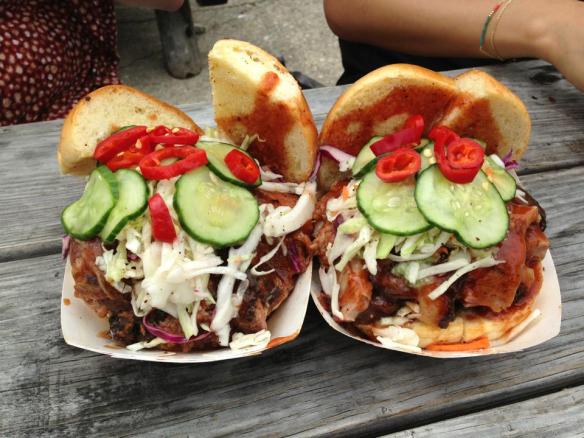 Sarah and me sharing a lobster roll.

The view of Manhattan from Brooklyn.

One of the prints I bought.

Us at the Brooklyn Brewery.

Polaroids on the High Line.

I left New York with much unexplored and will be returning at the end of August after I finish interning! 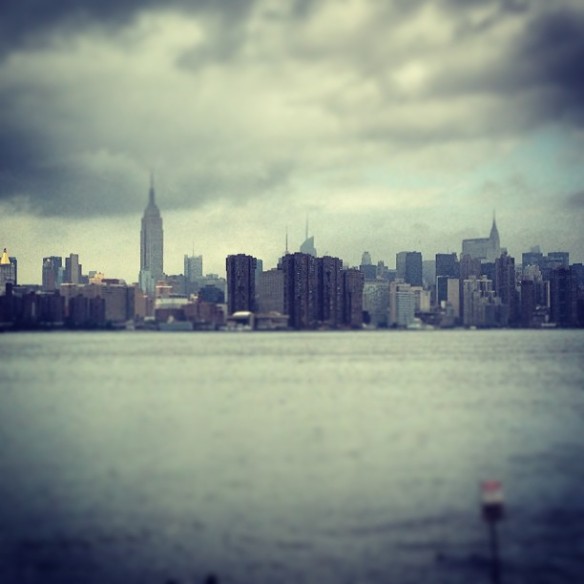 I took a weekend trip to New York City over the weekend with my friend Matt from abroad to visit a couple of Northwestern friends, Sarah and Kristin (who also studied abroad with me). Of course, many hilarious shenanigans ensued –

The entrance of the hoarder house.

After a fun day of exploring the city (Upper East Side, Washington Square, Times Square and the Financial District), Matt and I headed to the apartment we would be staying in with Sarah. As we waited in the lobby, we commented on the swanky building and classy adult tenants. 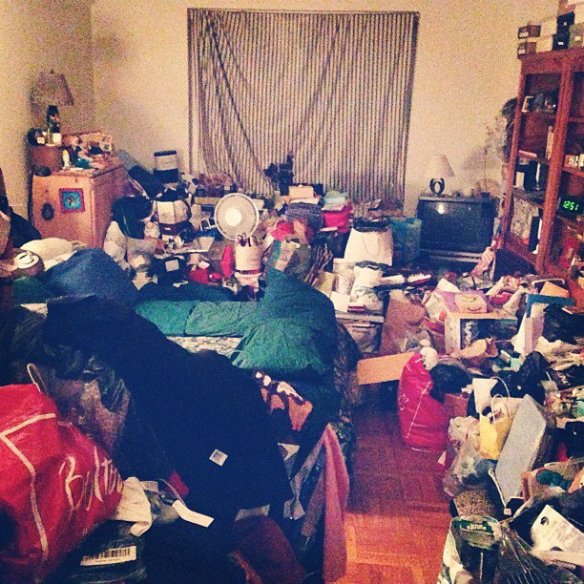 Little did we know, we would be staying in a hoarder’s apartment.

When Sarah arrived and picked up the keys, we excitedly headed up the stairs to the room. When we opened the door, we were surprised with piles and piles of stuff (or as I like to call it, the horde). There was a two-foot-wide path parted for us, paving the way through old stuffed animals, furniture, jewelry, clothes, movies, DVDs, bags – you name it. 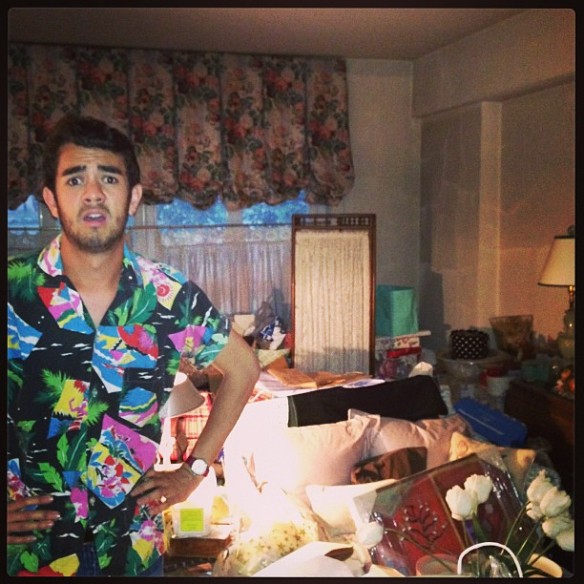 Matt amongst the horde.

Okay so maybe it’s a little bit unfair for me to make fun of all this, but it was a pretty strange welcome into the greatest city in the country; only in New York, I couldn’t help but think.

It turns out that the apartment belonged to a woman who passed away a few years ago who made her sister promise that she would go through everything very carefully. I assume she had a problem with hoarding and was highly attached to her things. I can imagine that it would be a huge, emotional commitment for her sister to go through the horde, but it’s equally unbelievable that someone would ask her sister keep a promise like that. 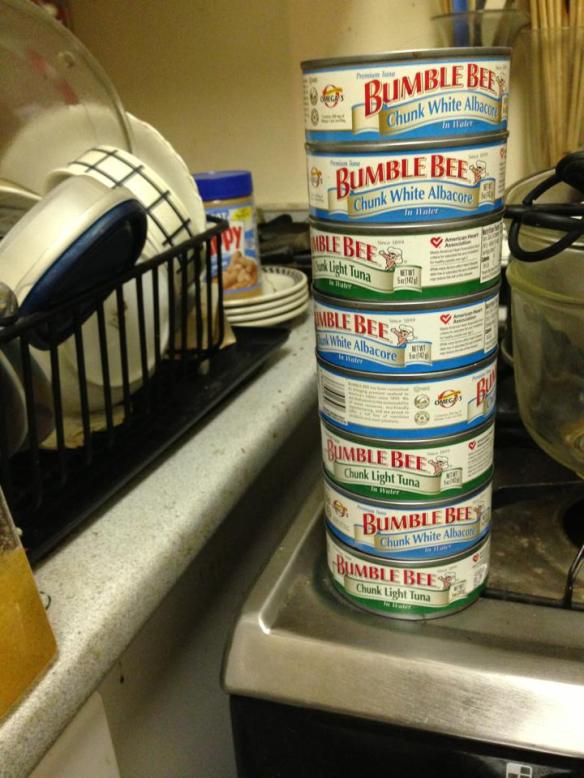 Stack of expired tuna cans in the kitchen.

I guess it’s not up to me to judge the intricacies and eccentricities of someone’s mind and attachments, but as sad as the situation was, it was also very weird and darkly comic as an outsider to the story.

Of course, we were curious to explore the place (as much as possible on the thin path we could walk on). There were paper-white eggs (secretly years and years old) in the fridge, wonderful costume jewelry laid out on counters and pill bottles still half full. The apartment seemed almost frozen in time – as if the woman still lived with all of that stuff. Maybe, in a way, she did.

But the years of waiting untouched made obvious wear upon the things: the towel shed when I dried off after a shower, the liquid hand soap turned hard in its bottle and a strange dusty taste filled the air. The toilet seat fell off the toilet. A bottle of ketchup had turned brown.

I can’t help but wonder if the rest of the apartment’s tenants know what lies beyond the doors of the hoarder house. Did they know her when she was there? Do they know what still remains? It was a unique privilege to see and live inside of a mystery like that, and I will certainly never forget my night in the hoarder house.

That’s a promise I can keep. 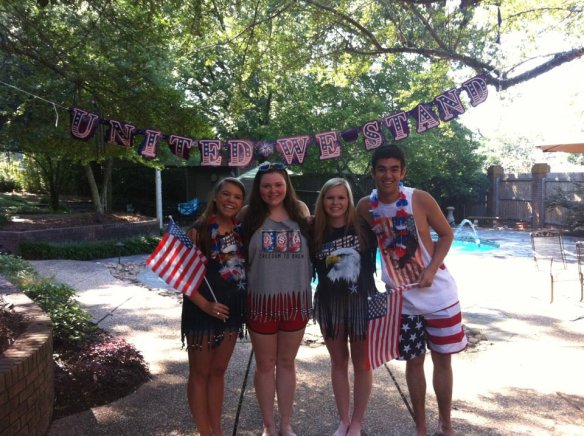 Some of my best friends and me at my annual America themed party back in Little Rock.

I could say a lot about how America isn’t exactly the land of the free for 70% of Americans that don’t live in a state with marriage equality, or how LGB people can be fired in 29 states and T people in 34 just for being who they are, or about a hundred other things that need to change – but most of us know all this. Instead, I’d like to talk about some of the wonderful parts of my coming out.

I came out on July 4, 2009 in a 30-minute, unplanned monologue filled with penetrating silences and about two dozen repeats of “I’m just not… I’m just not” before I was finally able to add “into girls.” Saying the words “I’m gay” after almost five years in the closet would have been too difficult.

My best friend Christa patiently waited, probably figuring out what I was going to say long before I said it but letting me make the difficult step. It still makes me tear up to think about what a rock she was for me in that moment and the weeks and years to follow. A couple of weeks later, we sat in her room just talking about cute celebrities. I had never been able to talk about someone I actually thought was cute until halfway through 17 – everyone else was doing it at the lunch table at 11. I remember I always said Pamela Anderson or Carmen Electra. LOL

Every single friend I came out to in Little Rock, Arkansas – where I never thought it would be okay or accepted – welcomed me with open arms. It got easier and easier as I saw my support system growing, as I was able to develop friendships I felt were open and full. No one even blinked or had second thoughts.

I got to make real change with some of these friends, putting a face to a “controversial issue” and making them realize that it’s just love and we’re just people. And even if they felt uncomfortable, even if just for a moment, they knew they loved me and they made sure I knew that too. 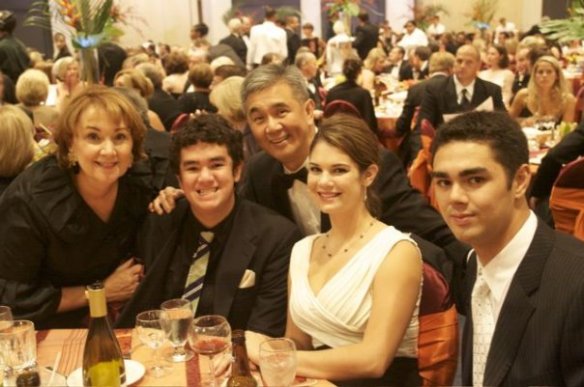 My family and me (in the midst of my awkward years).

I came out to my family towards the end of 2010. They have shown me that support comes in many ways, whether it’s Brad’s crude gay jokes (how could he ever stop making fun of me after so many years of doing it just because I came out to him?), Jessica and my lunchtime gossip sessions, my dad treating me like nothing had changed or my mom’s newfound activism.

And then there was a moment over a year later where we got in an impassioned discussion about the minority experience at dinner with my grandmother, Jeanie, at the table. I was discussing how minorities have to face every new interaction cautiously and hyper-aware, and my family kept saying, “why do you feel like a minority? Do you feel like a minority because you’re Asian?” To which I, in the heat of the discussion, passionately replied, “because I’m gay!” They hadn’t thought of that, which in itself is kind of beautiful, but I said this knowing that Jeanie didn’t know.

Jeanie turned to me, grabbed my hand and told me, “that’s okay. You’re still naming your daughter after me, right?” As you can imagine, I went to the bathroom and cried for about 10 minutes. 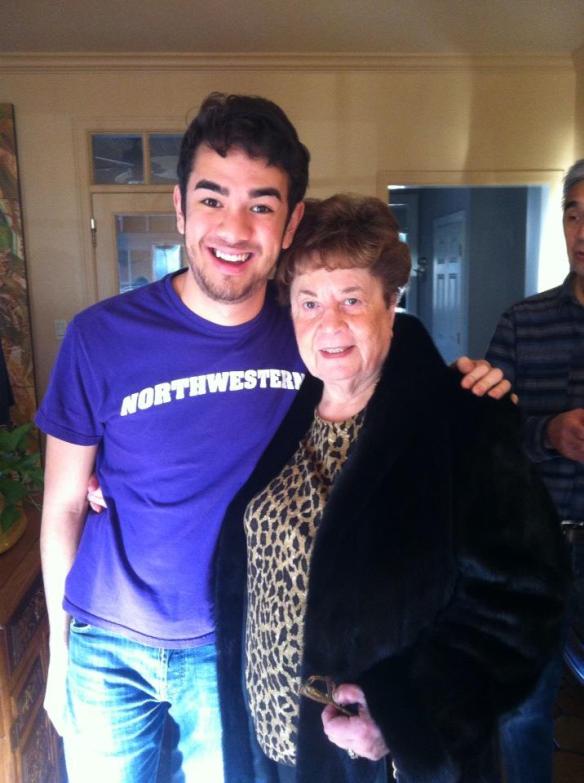 Jeanie and me before I left back for Northwestern this winter.

Since then, I haven’t had to worry. It’s been easy, and I’ve been very, very lucky. I’ve come a long way from a scared, lonely boy who thought he would marry a woman and get over it.

I am privileged to celebrate this Fourth (both July 4th and my fourth year!) in Washington, DC., where DOMA and Prop 8 were just struck down and where equality will one day be granted to all Americans in all states. I celebrate it with new and old friends, whether they are in Little Rock or Chicago or even London. I celebrate because today, I feel independent and proud and loved (okay and really, really cheesy and sentimental). For that, I am very thankful.