From the wall of my hostel in Budapest, Instant Groove.

It’s hard to adequately sum up my time in Prague and Budapest in journal fashion, because these two stops were much more about having a good time (AKA partying) than relaxing or sightseeing. I can tell you it will be a relief to not be drinking or staying out until 6am for the next couple of days in Vienna.

We randomly found these birds of prey you could take photos with at the Prague Castle.

First things first – the two best hostels I’ve lodged in were on this leg of my journey. Hostel One Home in Prague and Instant Groove Hostel in Budapest. Each of these hostels totally made my time in each city and introduced me to some great fellow travelers. 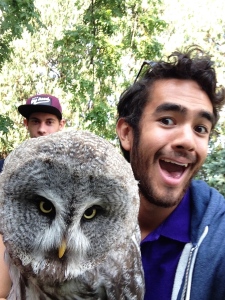 Going to Hogwarts now see ya on the flipside. 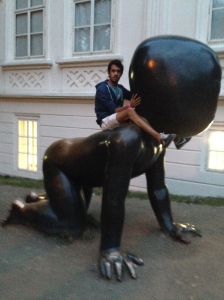 These giant faceless baby statues in Prague are supposed to represent the media. Not going to say I work in press…

Hostel One Home’s appeal is firmly planted in its “family dinners,” daily planned activities and awesome staff. As you probably inferred, the hostel hosted included dinners every night so that I pretty much always knew most of the people roaming around the hostel. Usually after dinner, we’d play drinking games and then all go out to a bar or a club (or both), where we could indulge in fine cocktails (seriously some top-tier drinks and spirits for $1-2 each – gotta love Central Europe) and beer before maybe hitting up the dance floor.

Hostel One Home was also the first place with a staff that actually hung out with its travelers. I actually loved it so much that I tried to get a job there, although it’s basically impossible to stay over my tourist visa without getting in trouble. Don’t get me started on arbitrary borders and the lack of freedom people have throughout the world to live where they want #immigrationreform.

Sedlec Ossuary, or the Bone Church.

(Legal) tagging at the John Lennon Wall – obviously I made a panda.

The touristy parts of Prague were definitely nice – it’s a gorgeous city, cheap and easy to walk around in. It is absolutely overflowing with tourists, though, and the old town is always packed full of people. I managed to see bits of the castle there, the main parts of Old Town (Charles Bridge the Astronomical Clock, etc.), the John Lennon Wall (where I did some of my own graffiti), this random bird sanctuary and the Bone Church (literally decorated with the bones of 40,000 people) in Kutná Hora, a town an hour away. I probably missed some good stuff, but sometimes getting a real cultural and fun experience in a city involves ditching the sights and having fun with the people you meet. A major part of Prague’s culture is its nightlife, so of course I had to take advantage!

Budapest was similar: it was not until my third day that I even saw any sights in the city (i.e. before I went to the downtown area or the Danube River that separates Buda and Pest, the two cities that joined to create – you guessed it – Budapest). I think I may have partied a little bit harder in Budapest, though, staying up until 6am literally every single night. My hostel was actually part of one of the biggest bars/clubs in Budapest, Instant, so I basically wouldn’t have been able to go to sleep even if I tried.

Instant Groove attracted some seriously awesome travelers, although not very many Americans (always cool to be the only one or one of two!). Everyone was there to have a good time and to make friends, which is exactly what I wanted to do. Pretty much everyone hung out together at night, from solo travelers to a group of six, which I think is cool because large groups can sometimes get a little bit antisocial. The hostel was so homey that we would basically have a big house party every night (I think someone said, “it’s not a hostel – it’s a week long house party”) until midnight and then head out to a ruin bar (highly atmospheric bars put in the ruins of old buildings rather than knocking them down – Budapest is known for them) and maybe dance a bit at Instant afterwards. It was nice to be able to go upstairs to sleep after the club rather than having to make our way home through the streets at night. 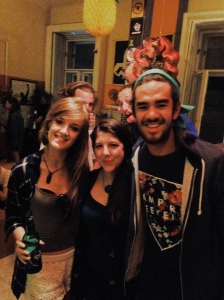 Our hostel was tight-knit enough for us to throw a big surprise party for our friend Dominic’s 22nd birthday. A few of us went out to buy balloons, decorations, donuts that we formed into a cake, candy, candles and ice cream, and everyone pitched in some money. It was, as always, a good time, and we went out in a humongous group afterward. There were 32 people in our hostel, and our group had 24. We must have looked like a school group roaming around the streets with that many people.

Another major appeal of Budapest (the perfect complement to the parties) is its thermal baths. Budapest is built on hot springs and has a number of bathhouses, ranging from quiet and intimate to massive and touristy. I hit up two of them, Széchenyi and Veli Bej, preferring the second because of its chilled out atmosphere and lack of a thousand people (Széchenyi is the biggest bath in Budapest). The baths were a perfect way to sweat out the toxins of the night before and get some good old-fashioned relaxation.

Széchenyi Thermal Bath – the best way to get over a night at the ruin bars in Budapest!

I was not ready to leave Prague or Budapest, going as far as to skip my train out of Budapest to head to the baths one last time with my friends. The new ticket cost $35 (the first was $15), but whatever it was worth it.