Picturesque is an understatement.

After some intense napping and “Mad Men” watching, I stepped off my seven-hour ferry into Santorini at 3:30 pm, getting lost and sweaty carrying my bags before arriving at my hostel an hour later. I had limited time on the island, leaving for Ios the next day at 1:30, so I rushed out of my hostel and straight to the black sand beach in the area of the island called Perissa. I spent two luxurious hours on the pebbly black sand with a piña colada in one hand and music playing through my headphones. I think I needed the solo time and even managed to get in a little obnoxious Facetime with the wifi from a nearby bar – I won’t say I didn’t pose with my drink and sunglasses with the tide strategically in the background awaiting connection. 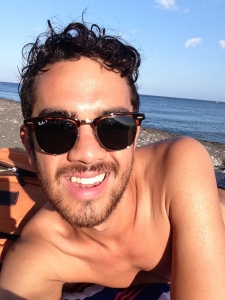 I had to wait an hour for the bus back to Fira, the part of the island where I was staying, and ended up sharing a taxi-van (I actually think it was just some local dude trying to get some money) with three girls from London and a newlywed American couple on their honeymoon (so cute). I got back to my hostel and grabbed a €2 souvlaki, which would become a pattern in my time in Greece considering their high fullness-to-cheapness ratio, before exploring Fira. There were some nice views and very touristy shops, which makes sense because the islands are basically designed for tourists, which there were maybe a billion of. There were a few cruises parked around, and not to sound judgmental (but it’s going to), the kind of Americans who do all-inclusive packages and resorts and other easy-for-American trips are more likely (but not all are like this of course) to be the annoying ones.

Watching the sunrise in Oia

I met some people in the hostel that night who would be traveling with me to Ios the next day, but I had to go up early (6 am) so I could go to the most picturesque part of the island, Oia, the next morning. Not sleeping much has been a major pattern in my trip, especially lately. I asked the guy working at the hostel about getting there early, and he kept saying I needed to go at 1 in the afternoon when “everyone goes there.” I told him I was leaving at 1 and he just kept saying that it was better to go in the afternoon and that it would be empty at that time in the morning, which ended up being the worst advice ever (that I didn’t take, obviously). 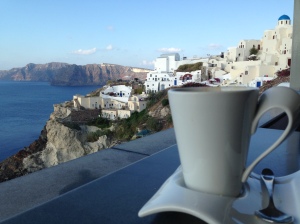 The view from breakfast

I got up at 6 and caught the 6:50 bus to Oia, which was totally empty aside from some wedding photoshoots going on. It was incredibly peaceful and quiet, and the views on the cliffs were stunning. The architecture on the islands is almost alien – white and blue and symmetrical and very geometric – but sitting on the cliffs against the coast and the rising sun makes them glisten in a way that makes any amateur photo look like a postcard. After exploring for a bit, I sat down at a restaurant called Floga (highly recommended for breakfast) with a view for breakfast and a latte, much of the time spent as the restaurant’s only patron. My Greek omelet (feta and tomatoes) was perfect, and I skipped the early bus just so I could sit and look at everything for a little longer. The solo time was again well-deserved and needed. Finally I made it onto the bus as about a dozen tour busses pulled up carrying more elderly American couples than you could find anywhere. Later, a girl would show me photos of Oia at sunset filled like a football game with people, and this is the off-season. I’ll take a peaceful morning sunrise over overflowing crowds anytime.