We met Lily outside an unassuming café/restaurant in the Saint-Germain area (the sixth) of Paris, the rest of the group not knowing the charms of the wine bar hiding below. I led them down the stairs into a stone arched cellar, cramped with people and lined on the walls with tables and chairs. At one of the room was a small counter where you could order wine by the bottle – I ordered the first one, their house white at €21.

Chez Georges has a charm unlike any other bar I’ve been to, and I can say with all honesty that it is my favorite place to grab a drink in the world. The music playlist is quirky and sweet, consisting mostly of oldies and a few modern songs that fit the oldie vibe like “Happy” and “Blurred Lines” and throwing in some Arabic music, lots of ABBA, the occasional French classic and crowd favorite “Hava Nagila.”

Nights at Chez Georges seem to have a standard progression from the two times I’ve visited (once before in 2012 with a friend studying in Paris). They start out slow – at a table if you’re lucky – and with casual glasses of wine and conversation. It’s definitely a conversation joint, although it’s a bit loud, and you’ll most definitely at points in the night have visitors to your table wanting to get to know you. Who says Paris isn’t friendly? The crowd consists of mostly French students and young people, with a few foreigners familiar with the area.

Conversations get interrupted with bits of sing-alongs, usually quite calm and intermittent at first, and by the second bottle of wine you’re much more relaxed into the environment. By the inevitable third, there’s someone in the room standing on a table or bench singing along. You laugh and smile at the guy (in our case) and comment on how good of a time he must be having. This is usually about the time the *first* play of “Hava Nagila” comes on and everyone stops talking to clap and sing along.

By the fourth bottle of wine (we did have four people!), you realize that you’re the one standing on a bench or table singing and dancing but that almost no one is really sitting down at that point and there’s not enough room to dance without using some of the place’s higher ground.

By the time you make it through the fifth bottle, it’s probably time to stumble over home and say goodbyes, and somehow we managed to make it without getting lost. You’ll wake up the next morning feeling not great but wondering how a cramped little wine bar creates such an amazing atmosphere. You’ll ask how you started talking to the five new French friends you made the night before. And most importantly, you’ll ponder when the next time you’ll make your way to Chez Georges will be and who you will bring to experience it.

The gardens at Versailles

I had originally scheduled a Megabus out of London for a Tuesday, but come 1am in the early hours of my departure date and I start puking for hours.

Of course being sick with a cough and sore throat and indecisive snot and exhaustion wasn’t enough – I had to get food poisoning. I think I woke up the whole house with my dry heaving and at that point I realized there was no way I’d be getting up at 8 in the morning. Apparently my flatmate Connie came down to try to wake me, thinking I’d accidentally slept through my bus, and couldn’t get me up shaking my leg and calling my name.

I spent the whole day in my sleeping bag, not eating but also somehow enjoying my sick day because it meant I got to spend another day with my flat – if any of you are reading this, thanks for the vitamin water and plethora of donated medicine.

I managed to get out of bed Wednesday morning and catch my bus to Paris and eventually to an airbnb I would be sharing with Josh and Jess, two Australian friends whom I’d met in Greece and met up with again in Croatia.

After a couple of hours chilling in the apartment, the three of us went to meet up for falafels with my English friend Lily who I’d met over the summer. It was surprising to see a falafel pita at such a steep price – €8 – but the place was really good and I couldn’t finish the falafel due to my still-weak stomach. The dinner was enough of an event for me after a long day of travel and after days of being sick, so we called it a night early.

Jess and me on the Seine

The next day started out lazy, as I needed a lot of sleep those days. We all watched our respective television series – me catching the new episode of American Horror Story not too long after airing back home. We finally made it out of the apartment in the early afternoon to do some sightseeing. We walked to the Pont de l’Archevêché (the love lock bridge) and along the Seine for a while before heading to grab macarons at Laduree, at which point the walking had gotten to me and I needed to head home and sleep. My exhaustion was getting worse by the day, which is always a drag when you want to take advantage of the city you’re in.

After hours of napping and rest, Josh and Jess came home with a baguette and some cheese for dinner. I still couldn’t eat very much but knew I’d need something in my stomach since we were going to meet up with Lily to go to my favorite bar in the world, Chez Georges, which is a cool enough joint for me to write a separate post about it.

Chez Georges wine bar – my favorite bar in the world!

Josh and Jess were supposed to leave for Barcelona the next day, Friday, and I was going to store my bag in the train station until I could bring it to a friend from Northwestern’s apartment. We exhaustedly made our way to the train station (we had stayed out until probably 3am and had to check out before 10) and waited for nearly an hour at the ticket counter, where all tickets to Barcelona were sold out until the next day. We spent another hour in the train station trying to find accommodation for the night and then made our way to a cheap hotel to drop off our stuff.

At this point, I had started to feel so sick and exhausted (our night at Chez Georges definitely did not help) that I decided that I needed to see a doctor. We spent an hour and a half waiting in a walk-in clinic to hear what I already knew: “you need to be on antibiotics.” Of course I can’t just walk to the store and pick those up without a prescription, which my dad usually writes for colds and the like, and my dad couldn’t write one for Europe. Ironically, the last time I was in Paris, I had to go to a doctor and ended up with antibiotics.

I don’t know if it’s medically possible, but I started to feel a little better not even an hour after taking my first pill. Since we had spent most of our day trying to fix unfortunate problems, we decided to take a visit to Shakespeare and Co., the famous English bookstore that’s original location’s patrons once included Hemingway and Joyce. I had also watched Before Sunset on the bus over, where the shop was also featured. I bought a book (On the Road), which they stamped with their famous emblem, and we sat down for crepes afterwards. I don’t think it’s humanly possible to get crepes without getting a savory and a sweet one – I opted for smoked salmon and finished with Nutella banana. Because it was late, I ended up staying in the hotel instead of taking my things over to my friend’s.

Josh and Jess left early the next day and I went to visit Versailles, the old Chateau and gardens of French royalty, including Marie Antoinette. It was a nice morning surrounded by annoying tourists who don’t know how to walk without stopping in front of you, something I hadn’t really done in a while. I enjoyed exploring the area and even ran into a girl who I recognized as a Northwestern student. 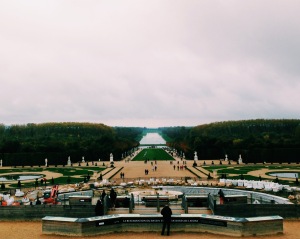 After Versailles, I met up with my friend Kelley who I’d be staying with for the night in Montmartre. We grabbed coffee at her favorite café and explored the area before grabbing bread, cheese and wine for dinner. She roasted up some veggies she had in her fridge to complement.

Later we would out for her coworker’s birthday at a bar, where I met a large group of international people living in Paris. I couldn’t help but think how much I would like this to one day be me – a foreigner living in Europe, an expat, part of an international community. The real question is how I’m going to get that visa (marriage please?).