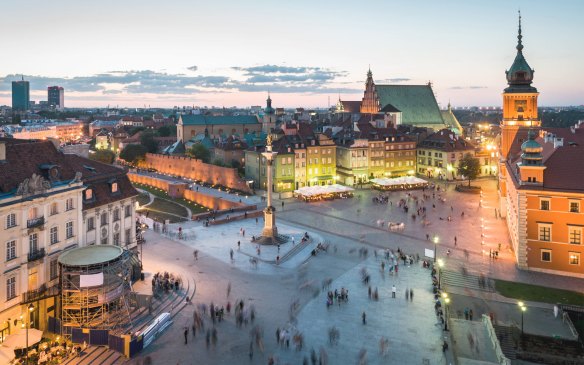 We arrived in Warsaw late at night and basically made our way to the boondocks for this hostel in the middle of nowhere called Hostel Krokodyl. We had made our reservations at the last minute and were unable to get any of the better-located hostels. After dropping off our stuff at the hostel, we went to the hostel we would be staying in the following night, Hostel Oki Doki, where we thought we might run into some friends from our hostel in Krakow. We didn’t, but after a beer each, Josh and I headed to another Pijalnia Wódki (the shot bar we went to in Krakow) for a couple of drinks before heading back to the hostel.

The next morning, we moved our stuff over to Oki Doki and went for lunch at a really nice restaurant called Aioli. Poland is pretty cheap, and even though it was a pretty hip place, I was able to get a shrimp salad, a soda, a mojito and dessert for about $18. 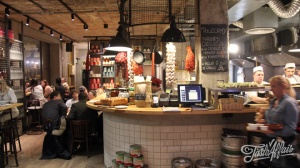 Josh and I explored Old Town and New Town for a bit, stopping to grab a waffle and meeting a middle-aged American couple who were living in Italy. I was a little embarrassed because they started talking to us after eavesdropping on my criticism of the GOP, and I think they were quite moderate voters… Probably should just shut my mouth after that but midterm results were fresh on my mind.

Josh was feeling sick, so after a short while walking around, we went back to the hostel to relax for a bit.

When I had first gotten into Warsaw, my Facebook reminded me that a friend I had met in Marseille lived in Warsaw, so I sent him a message and arranged for him to meet up with me and Josh for dinner. Karol knew a lot about Polish history and the city and gave us some insight into the political climate of the country.

After dinner, Josh and I went to the hostel for an early night, although I was kept up for hours by a couple of loud snorers in the room. I would periodically cough really loud to get them to stop momentarily, but it was never enough. Snoring dormmates are one of the major backpacker struggles.

Josh left early the next morning to head back to London, saying goodbye after 20 days meeting up in five countries throughout the summer. I slept in a little bit and grabbed the cheapest breakfast at Aioli – $3 for a fancy salmon on brioche with rocket, yogurt and a cappuccino (gotta love Polish prices). 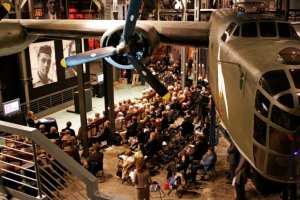 Inside the Uprising Museum. Photo credit: In Your Pocket

I decided to spend the hours before my evening flight at the Uprising Museum, which ended up being a huge mistake. The museum itself is really nice, and in the time I had there had some interesting stuff, but I waited two hours in line to get in and an additional hour for a six-minute movie I had paid for. I don’t know if it was because Polish Independence Day was the next day or if its always so busy, but I only had about 30 minutes to peruse the museum and most of that time was spent being frustrated at how long I had to wait to see any of it. I left and ran back to my hostel to get my things before I would catch a bus to the airport, which was 45 minutes away and not the main Warsaw airport (because Ryan Air is the worst).

Except when I had asked about the bus the day before, the hostel staff just told me where to catch it and didn’t tell me that I had to book online before. Upon hearing this news, I tried to get a spot but it was all sold out, forcing me to spend $45 on a taxi to the airport. I was obviously pretty frustrated with the hostel for leaving out such an important detail, but I had to make it to the airport and had no other choice.