After sleeping my way through the seven-hour bus ride from Vienna to Munich, I arrived at my hostel and promptly grabbed dinner at a local bierhall called Augustiner Bräustuben. It was pouring down rain, and the walk was miserable, but I was welcomed into a loud, bustling environment filled with both local Bavarians and tourists. I walked to the far side of the hall and sat near a group of men and women dressed in lederhosen and other traditional Bavarian clothes, playing accordion and singing and slapping the walls. I grabbed a pretzel from a basket in the middle of the table and hung up my jacket and umbrella to dry. My shorts and shoes were soaked, but luckily I would wait out the storm through dinner and walk home in just a light drizzle. I ordered a delicious, massive schnitzel with potatoes and berries, passing up their famed pork shoulder (which I never got to try) because I thought it might be too rich for the night, and a maß (a whole liter) of beer, which I was unable to finish (needed an early, chill night and didn’t realize ordering a “big one” was that big). People say the portions are too big in America, but one look at a Bavarian dinner and I think they might reconsider! 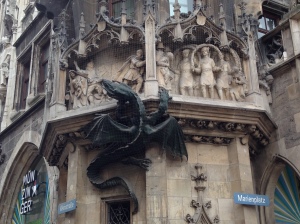 Dragon statue in Marienplatz – a symbol of the Black Death.

I headed to bed early so that I could be rested for my one full day in Munich and make my morning walking tour, which ended up being one of the best ones I’ve taken. I think walking tours, especially the free ones (always tip of course!), are the best way to get a feel for a city, its architecture and its history. Our tour took us to the Rathaus-Glockenspiel right at noon, when it puts on its show, and inside a few of Munich’s notable cathedrals. We stopped for a break at the Viktualienmarkt, where I snacked on a tasty (but messy) bratwurst and some warm honey wine. It was a cloudy, sweater weather day, and the cozy cup of honey wine really hit the spot. I bought two small bottles for my mom and brother’s girlfriend (you better open them while I’m home).

I met a few Aussies on the tour (pretty much everyone in my hostel was from Australia), and we headed to the English Gardens and Munich’s surfing wave, which is literally an artificial wave in a river that people surf across. I ended up going to a café by myself shortly afterwards, eating a tart berry cake and a latte – I could really get used to the pastries and coffee in this area of the country.

Surfing Wave in the English Gardens

I grabbed a cheap falafel for dinner and then drank beer in the hostel with some of the people I’d met before heading to another bierhall. The next morning, I ate breakfast in the hostel and packed a sandwich for my flight to London, which required a layover in Copenhagen and two hours of busses and trains from the airport to my home in London – traveling cheap usually means traveling long.