My trip to Marseille was all about getting out of Marseille – making it one of my favorite spots of the trip (I know I keep saying that but it’s really hard when every place defies my expectations).

I checked into my hostel, Vertigo Vieux-Port, in the early evening on Wednesday and could not find a single English speaking and/or young person to hang out with. Much of Marseille’s tourism is French people on holiday, although I would later find a large group of solo travelers. Eventually I met two girls who would become my companions. 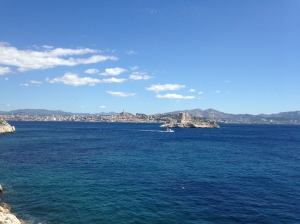 On Thursday, we got up early and headed to an island in the Mediterranean called Frioul, just a 40-minute ferry ride from Marseille. We had a relaxing long afternoon on the rocky beach, occasionally running into the cool, buoyant waters of the sea to float and swim. After briefly falling asleep, we hiked through the rocky hills and forts of the island before pushing our way onto the ferry to head back to Marseille for dinner. Lines in Marseille, especially for its infrequently running transportation, can be really forceful and breed much anger. After missing the first ferry, which was late, we managed to make our way onto the second only 30 minutes after (we thought it would be 1.5 hours). 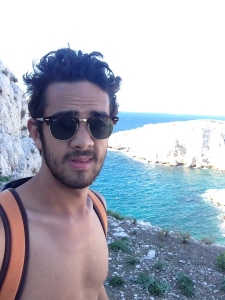 Our first dinner experience in Marseille ended up being one of the more memorable (not in a good way) experiences of my trip. We went to a super touristy (mistake) restaurant that was 15 euro for three courses. The food was some of the worst I’ve had, and after our main meal we could not get the waiter’s attention to order dessert. We kept calling him over, finally asking another waiter who responded:

He then proceeded to stand awkwardly looking for things to do, like brush crumbs off other tables.

After 45 minutes of waiting and calling for the waiter, we put down an incomplete payment, which of course I would never normally feel like was okay (we weren’t getting our full meal anyway), and ran off when the waiters weren’t looking. Huge adrenaline rush, slight guilt but less frustration because our dinner was cheaper than planned. Don’t think I’m a normal dine-and-dasher – we could have easily not paid anything, and we were trapped!

Our third companion left the next morning, so Katelyn (the one who didn’t leave – obviously) and I headed to Aix-en-Provence for the day. Aix-en-Provence is a small(er) town in the south of France but not on the coast. Its cuisine is much better and easier to navigate than Marseille’s, and I had one of the best meals of my trip for lunch shortly after arriving. It was a meat plate of foie gras, chicken and goose breast with a few lovely sides of different vegetables and a potato gratin – wine of course on the side. Always wine in France, obviously. We finished off with two decadent desserts: a rich flourless chocolate cake and a raspberry crème filled cake with raspberry sauce on top.

Our waiter was extremely attentive and suggested everything we had. We hadn’t originally planned on dessert, but after such an enjoyable meal and a quick recommendation, we let him take our order and indulged. This and the following day would be two of my biggest food splurge days of the trip – followed by cheap take out and home-cooked (yum) meals.

We walked a bit more around and then headed to another restaurant, where we split a delicious white fish tartare and an overcooked “barely-cooked tuna.” Our waiter suggested a pistachio cake for dessert, which was nice but not comparable to our wonderful lunch. We headed back to Marseille pretty late and headed to bed, although it should be noted that a whole bottle of wine or more was split every night of my time in France.

The following day we woke up early to go to Cassis. In typical Marseille fashion, we couldn’t get on our bus after much pushing and shouting (we did get there 30 minutes early) and ended up waiting another hour and a half to head there. 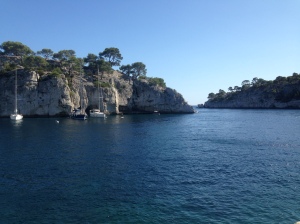 In Cassis, we had a nice lunch at Le Poissonnerie, a restaurant owned by two brothers – one who fishes and one who cooks. We split a bottle of local wine (Cassis is known for its wine) and a hearty portion of fish soup, which you pour over toasted bread with mustard and cheese on it. Our main course, a filet of white fish, was fresh though a little overdone and overshadowed by the buttery vegetables on the side. After lunch, we headed to one of Cassis’s calanques (water inlets from the sea surrounded by rocky landscapes). We found a more isolated rock face to spend the afternoon relaxing in the sun and diving into the water, which was too cold to spend more than a minute in but extremely refreshing. 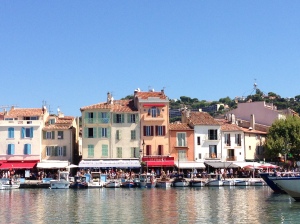 We headed back from Cassis in the most heated transportation rush we had been in, with two busses worth of people trying to fit into one. Luckily we made it on, and the bus after us was completely stuffed with people.

Later that night, we headed to the Positiv festival, an electric festival with Disclosure, Flume and Cashmere Cat headlining. We danced until 5 in the morning and then had to walk an hour back to our hostel, where a crazy homeless man decided to throw a giant cinderblock towards us (it was too big to make its way anywhere near us). Obviously we ran.